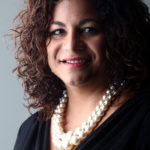 Sandra D. Rodríguez Cotto is a journalist with decades of experience in Puerto Rico, the United States, and several Latin American countries. She works as a news and policy analyst, radio commentator, television producer, columnist, and blogger.

She conducts her syndicated radio program on a series of regional stations that make up the Puerto Rico Information Network, is an analyst at radio station WPAB Ponce, and publishes a weekly column in the cyber newspaper NotiCel. She is also a contributor to several media outlets in the U.S. (El Diario La Prensa, All Digitocracy, Huffington Post, USA Today, Politico Magazine) and the Public Relations Portal of Latin America, based in Argentina.

****MUST REGISTER FOR EVENT, SEE REGISTRATION URL BELOW