Neoliberalism loses, the Collegium triumphs, in Netflix’s “The Chair.”

“To be an English teacher, you have to fall in love with stories, always trying to see something from others’ points of view,” asserts Professor Bill Dobson. Dobson, a main character in The Chair (portrayed convincingly by Bill Duplass), is a faculty member at fictional Pembroke University—an elite private institution. “You try to occupy a different space in the middle of possibilities,” Dobson continues. “It’s a dance, an ongoing conversation, that you have with the text.” 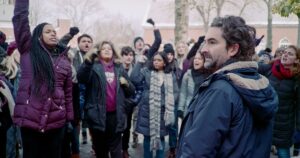 That monologue—something you would expect to hear in a lecture or read in a book—is the turning point of the Netflix series that debuted last week. It’s a curious turning point, too, because of where Dobson says it. With his career on the line because of a classroom misstep that fueled campus-wide protests, Dobson’s words are spoken before a Review Board that has the power to terminate his professorship.

One panel member is Dobson’s chair, Dr. Ji-Yoon Kim (portrayed wonderfully by Sandra Oh), the first woman and person of color to chair Pembroke’s English department. As the camera pans the scene, you can see in her eyes that she is moved deeply by Dobson’s choice of words. 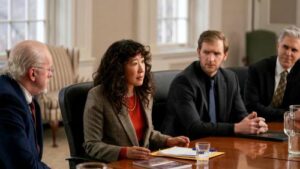 Professor Kim at the Review Board meeting with Dean Larson at left (photo, Financial Times)

The Review Board chair, Dean Paul Larson (played by David Morse), trivializes Dobson’s response. ”Thank you for that lecture,” Larson replies. Dr. Kim, though, sees it differently. She asks the Board, “Why are we here?” and wonders what will be gained by removing Dobson from the faculty. “Firing him is not going to change the culture here,” she concludes.

Kim then urges the group to stop thinking first and foremost about the endowment and where the school is ranked. Instead, she gives her version of the answers to fundamental questions: What is a college for? What is the purpose of a college education? With that, she declines to participate further.

It is not a scene that I expected to view–at least not in The Chair, given the first five episodes (150 minutes) and the initial 19 minutes of Episode 6. Up to that point, The Chair does, as Joe Nocera (former NYT columnist) puts it, “dreamed up a delicious skewering of modern university life and brought it to life.” Put another way, creators/scriptwriters Amanda Peet and Annie Wyman show higher education with its warts and pitfall–its underbelly, so to speak. They also portray deeply flawed characters, including Dobson. We witness a dramatization of faculty eccentricities, student proclivities, institutional fetishes, scandals, and struggles. It is the stuff (including edgy behavior) of which newspaper headlines are made.

Depicting some of that is important and necessary, and it has entertainment value, too. But the big question is, how far and deeply do you go? My concern is that it is too easy to get absorbed in what comes before the middle of Episode 6 and then fail to acknowledge the hard-hitting nature of what comes next.

Episode 6 is what I consider to be the “moral of the story.” Dobson and Kim refuse to be further sidetracked from their vocation and life’s work.

They say NO! to industrialized, donor-driven, and corporatized higher education. They remain true to what drew them to academia in the first place, and they refuse to be bought off by a system that uses hegemonic means to gain complicity.

The sad reality is that many things that influence, and sometimes corrupt, everyday life in America (money and politics are at the top of the list) afflict higher education. But what is important to remember—and The Chair does that in Episode 6—is why many academics decide to enter the professoriate. It is because they were called “to do the work,” that is, to teach/research, engage with and mentor students, collaborate with colleagues, and advance knowledge and understanding through scholarship.

Being an academic, you see, is not just something that one does. It is very much who one is.

The heroic storyline of The Chair is that Dobson and Kim are faculty members, first and foremost—even when that choice comes with personal and professional costs. Neoliberalism loses in The Chair and The Collegium triumphs.

Following the path dramatized in The Chair is not easy. It never is. But the alternative—the status and trajectory of higher education—is arguably much worse. How long will it be before the Dobson’s and Kim’s of higher education are outnumbered? That day may already be here. If there is still time, then The Chair’s primary contribution is as a clarion call. Faculty, everywhere, step up before it is too late.

A slightly different perspective with a different introduction (framing) is available in podcast (audio) form. 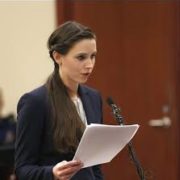 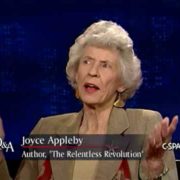 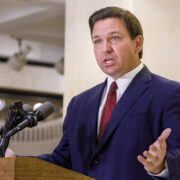 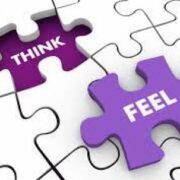